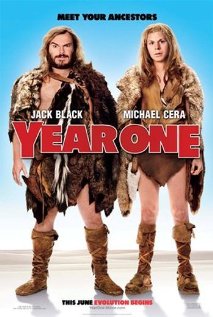 Not recommended under 15 (Themes and sexual references)

Zed (Jack Black) and Oh (Michael Cera) live in a primitive hunter-gatherer community where neither excels at his task. Zed is in love with Maya (June Diane Raphael) who wants a big strong man who can protect and provide for her, someone who is the exact opposite of Zed. Oh is desperately in love with Eema (Juno Temple) who barely seems to notice his existence. When Zed eats the forbidden fruit he is cast out of the village and Oh joins him on an adventure to see the world and begin a new community. Instead they stumble upon Cain (David Cross) and Abel (Paul Rudd), who are fighting in a field. After Cain murders Abel they find themselves at the mercy of a mad man who will do whatever it takes to save himself, including selling Zed and Oh as slaves.
It is in a slave market that Zed and Oh see Maya and Eema again. They have been captured by a neighbouring tribe and have also been sold as slaves. Zed promises that he will find a way to free them all. When their caravan is attacked by soldiers Zed and Oh manage to escape into the desert and, in an attempt to follow the caravan, find themselves in a Hebrew village as guests of Abraham (Hank Azaria) who is obsessed with circumcising his son Isaac (Christopher Mintz-Plasse) and any other males he can find.

Children over 13 are unlikely to be disturbed by anything in this film.

Year One is a crude and silly comedy which may have appeal for older adolescents and fans of Jack Black.
The main messages from this movie are that you have choices in life and that it is through your choices and actions that you make our own destiny.
Values in this movie that parents may wish to reinforce with older children include: