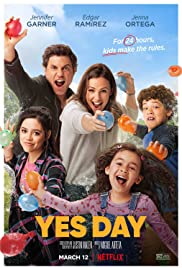 Not suitable under 8; parental guidance to 10 (violence, potential for imitative behaviours)

For stay at home mum, Allison Torres (Jennifer Garner), the theme of her life used to be, “Yes”. Yes to skydiving, yes to rock climbing, yes to every random adventure that ever came her way. When she and husband Carlos (Edgar Ramirez) had kids, everything changed. In an effort to keep Katie (Jenna Ortega), Nando (Julian Lerner) and Ellie (Everly Carganilla) from ramming things in electrical sockets, falling off the roof or injuring themselves with science experiments, life was mostly, “No”. After a parent-teacher conference, during which Allison is portrayed as a dictator, she and Carlos decide to try a ‘Yes Day’, where, after a few ground rules are laid, they say yes to everything their children request for 24 hours. Katie, who desperately wants to attend a festival that her mother doesn’t approve of, makes a bet with her mum that she will never be able to say yes for the whole day, and she and her siblings concoct all sorts of activities she is sure her mum will refuse. When tensions flare and plans go awry, Allison discovers that her daughter is mature in ways she never imagined, and Katie learns that sometimes “No” is the best answer she could ever receive.

Losing your identity to a role you must play; Good parent versus bad parent; The evolution of families; Children being rude to parents.

Yes Day is a family film based on the book by Amy Krouse Rosenthal, where (with a few ground rules) the parents have to say yes to everything their children request, for a whole day. It features a wonderful cast and a fun yet predictable plot. Due to questionable content and potential for imitative behaviours with regards to the children’s behaviours and exploits, this is not a film for younger kids but rather one that will best be enjoyed by older children and parents.

The main messages from this movie are that despite all the ups and downs of everyday life, families share an unbreakable bond; and that getting to do everything you want isn’t always as fun as you may imagine.