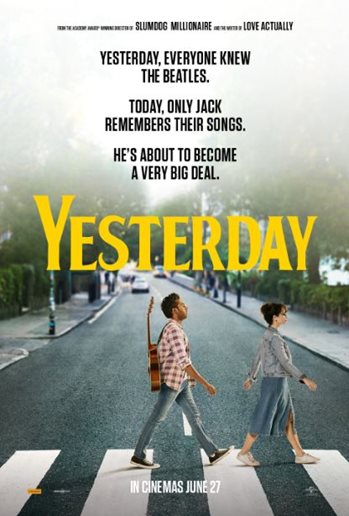 Not recommended under 12; parental guidance 13-15 (Adult themes; lack of interest for younger viewers)

Jack Malik (Himesh Patel) is a failed singer/songwriter despite the best efforts of his long-term friend and manager Ellie (Lily James). When his gig at the Latitude Festival draws a handful of kids as an audience, he decides to call it quits. On his way home, however, he is hit by a bus while riding a bike, due to a global power cut. Jack wakes up in hospital in an alternate reality.

He discovers that the blackout has wiped several things from the collective memory of the inhabitants of Earth including the Beatles, Coca Cola, cigarettes and Harry Potter. Jack delves into his own memory and starts playing all of the Beatles hits as his own. He quickly rises to super star status with even Ed Sheeran (himself) admitting that Jack is better than him. Jack’s conscience plagues him, however, and he has to decide whether to come clean and how to hold on to Ellie.

The evolution of relationships, the price of fame and fortune, personal integrity vs personal desire.

Jack’s face after the accident is pretty messed up. He is missing teeth and his mouth looks a bit gruesome.

There is quite a lot of coarse language in this movie, including:

Yesterday is a British romantic comedy in its finest form. The juxtaposition between reality and an alternate reality is cleverly done including Jack meeting up with an older John Lennon. Due to its contents it isn’t suitable for younger children but teens and adults will enjoy it, especially if they are Beatles’ fans.

The main message from this movie is that personal happiness is more important than fame and fortune.