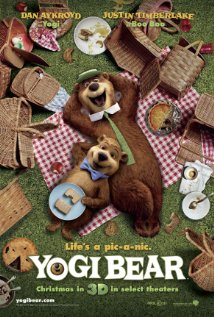 Not recommended under 5, PG to 7 ( Violence; scary scenes)

Jellystone Park is under threat as dastardly Mayor Brown (Andrew Daly) threatens to close it down and sell it off to developers because the city has run out of money. Ranger Smith (Tom Cavanagh) does all he can to keep the park open with the help of conservationist Rachel (Anna Farris) but to no avail. Yogi (voice of Dan Aykroyd) and Boo Boo (voiced by Justin Timberlake) also try to help but their best intentions miserably backfire. All seems lost until the Boo Boo’s pet turtle comes to the rescue.

The destruction of natural habitats and national parks for commercial gain.

There is a lot of slapstick violence and accidental harm in this movie , including:

There is some name calling such as ‘dumb’ and ‘pighead’.

Yogi Bear is a comedy that may appeal to children aged 5 – 10. Younger children may find some scenes scary and the story may lack interest for them. There is a lot of slapstick comedy that children are likely to enjoy but may also imitate, so parents may wish to emphasise that in reality these actions would cause injury. The 3D effects do not appear to contribute greatly to this movie.

Values that parents may wish to reinforce with their children include the conservation of wildlife and national parks.