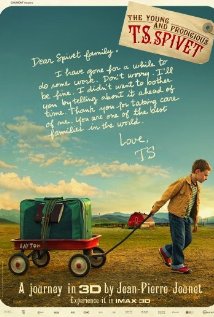 T.S. Spivet (Kyle Catlett) is a ten-year-old child prodigy with a passion for cartography, scientific observation and inventing machines. T.S. lives on a range in Montana with his entomologist mother Dr. Clair (Helena Bonham Carter), his father (Callum  Keith Rennie), who dreams of being a cowboy and his teenage sister Gracie (Niamh Wilson), who wants to become Miss America.

We also hear of T.S’s twin brother Layton (Jakob Davies), who died recently in a shooting accident involving T.S. While the entire family is grieving, nobody talks about the accident, but T.S. is very distressed. He blames himself for the accident and has imagined visits from his dead brother.

One day after attending a lecture on perpetual motion, T.S. decides to invent a perpetual motion machine and submits his blueprints to the Smithsonian museum. Sometime later, he receives a call from G.H Jibsen (Judy Davis) from the museum who, believing T.S. to be an adult, informs him that he is the winner of a prestigious award for his machine. Miss Jibsen invites T.S to Washington to accept the award and give a speech.

Without telling his family, T.S. packs a suitcase and sets off on an eventful journey to Washington D.C.

The film contains scenes related to the accidental gun death of a young child, action and peril involving young children, and scenes depicting the injury of animals including some blood and gore. Examples include:

The film contains coarse language and name calling. Examples include:

The Young and Prodigious T.S. Spivet is an adventure drama suited to older adolescent and adult audiences. It contains violence, disturbing themes and scenes, and coarse language that make it unsuitable for children and tweens, and parental guidance is strongly recommended for younger teens. The film is thought-provoking and at times emotionally intense, although with a quirky whimsical feel. While the film on the surface is about a young boy’s lone journey across the US it is also a story about facing emotional demons and a child’s desire for his parents’ love and respect