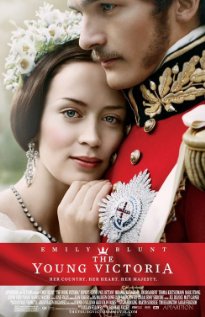 Not recommended under 13 (Lacks interest)

Queen Victoria (Emily Blunt) is 11years old when she realises that she is next in line to the throne of England, with her mother the Duchess of Kent (Miranda Richardson) to be Regent if the existing king, King William (Jim Broadbent) dies before Victoria comes of age. In the meantime, others try to position themselves to get control, including Sir John Conroy (Mark Strong) who has a great deal of influence over the Duchess of Kent, and the Duchess of Kent’s brother King Leopold of Belgium.

King Leopold sends his nephew Prince Albert (Rupert Friend) to England to ‘woo’ the queen and hence create a strong link between the two families. Victoria and Albert fall in love, but the courtship is not straightforward as Lord Melbourne (Paul Bettany) initially has an enormous amount of influence over Victoria. It is only after some real political problems and the supportive and good advice from Prince Albert that Victoria realises just how important he is to her and they are married.

In addition to the above-mentioned violent scene, children under the age of five could be concerned by a scene in which Victoria is sick and Sir John is trying to force her to sign over the regency to her mother. Victoria refuses, and Sir John shouts at her and shakes her.

The Young Victoria is a period drama which describes the life of Queen Victoria before she became Queen and up until the birth of her first child. It highlights the difficulties faced by a young woman expected to inherit the throne of England. Victoria shows strength, determination and a great deal of courage in her desire to stand up for herself and her beliefs against others who try to manipulate and use her.

Values in this movie that parents may wish to reinforce with their children include the importance of:

This movie could also give parents the opportunity to discuss with their children the difference between stubbornness and strength, and the disastrous results that can occur if the two are confused.