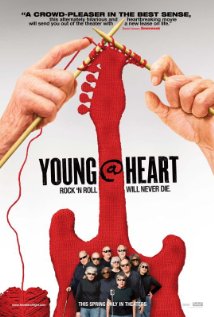 Not recommended under 8, Parental guidance to 13 due to themes and lack of interest.

Young@Heart is a chorus group of very elderly singers, with an average age of 80, who perform in the US and have toured Europe. Surprisingly, and sometimes comically, the music is contemporary and classic rock ’n roll including hits by the Clash, Sonic Youth and the Ramones. This film is a documentary by Stephen Walker, about Young@Heart as a group and as individuals, displaying their artistic talents which are brought together so well by director Bob Cilman. It is inspiring to see a diverse group of people overcoming the isolating effects of old age and coping with ill health and heartbreaking losses while embracing the joy that music and friendship provide them.

Children in this age group may also be disturbed by the above-mentioned scenes and by the fact that we hear of the deaths of two leading members of the group during the making of this film and see the distress of their colleagues.

Children in this age group, like many adults, may be upset by the reported deaths of leading choir members.

Some mild sexual innuendo in conversations between the interviewer and choir members, including

Young@Heart was originally made as a BBC documentary aimed mainly at an adult audience.
Its main messages are that you’re never too old to try something new and that you should live life to the full.