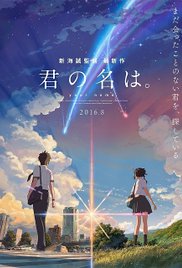 Not recommended under 11, parental guidance 11-13, due to disturbing scenes and themes (In Japanese with English subtitles)

Your Name is a (subtitled) Japanese animated fantasy film about a mysterious body-swap that occurs between two senior high school students living in separate parts of Japan. Mitsuha (Mone Kamishiraishi) is a young girl living in the small countryside town Itomori, longing for the bustling life of a city such as Tokyo. Taki (Ryunosuke Kamiki) is a high school boy living in Tokyo himself. The two begin to have vivid dreams where they believe they have swapped bodies but they soon realise that they, in fact, actually inhabite each other's bodies.

The pair begin to communicate by leaving each other messages or phone memos, in an attempt to help maintain the appearance of normalcy when the other is in control. Eventually, they both start intervening in the other person's life in small but significant ways. Mitsuha spends her time in Taki's body developing a close relationship with one of Taki's female work colleagues, eventually organising to take her out on a date. In turn, Taki helps Mitsuha become increasingly popular at her school.

At one point, Mitsuha mentions to Taki that a comet is going to be present soon, and that she is excited to see it. Soon Taki realises that he and Mitsuha no longer seem to be swapping bodies and he decides to visit her, travelling around rural areas of Japan in an effort to locate her hometown. What he discovers brings new challenges for Taki.

There is limited sexual activity and nudity in the film, including:

There is some substance use, including:

Your Name is a romantic film that centres on the flourishing relationship between Taki and Mitsuha, and Taki's quest to save her from an otherwise inevitable fate. Although the two do not meet for most of the film, they touch each other's lives in significant ways. The movie highlights the importance of living in the moment, and not taking the people that you love for granted. It also speaks about fighting for what you believe in, and taking chances and risks where necessary. The movie further explores the nature of fate, and the question of whether some individuals are 'meant to be' with one another.

The film is more suited to teenage viewers. The story may confuse younger children and there are some upsetting scenes and themes. It is also in Japanese with English subtitles.