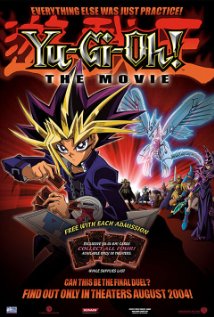 Not recommended under 8s, PG to 13 (Viol. Scary stuff)

Yu-Gi-Oh! is a 90-minute cartoon representation of the card game Yu-Gi-Oh, which is based upon a Japanese comic book. In the movie, the main character, Yugi Moto is the world’s number one Duel Master. Yugi’s alter ego is Pharaoh, whom Yugi can summon to assist him in winning ‘Duel Monsters’, a card game involving holographic monsters that do battle. His arch-enemy is a video game entrepreneur named Seto Kaiba. Anubis, the Egyptian god of the dead is another enemy who wants to take revenge against Pharaoh.

Kaiba challenges Yugi to a duel during which both players activate an array of monsters, magicians, knights and Egyptian gods. Yugi and his friends fend off hordes of rotting Mummies and attempt to destroy Anubis and save the world.

Many young children, particularly preschoolers, would find the monsters terrifying:

Children in this age group would also be scared by the above-mentioned scenes.

Children between the ages of eight and thirteen in general should be capable of appreciating the comical, non-realistic nature of the Duel Monsters and associated violence. However, the frequency with which the violent images are presented may have negative effects on this age group.

The entire movie was about the Yu-Gi-Oh product and an extensive line of Yu-Gi-Oh cards and gadgetry was used throughout the movie. The film could easily be interpreted as a 90 minute commercial designed to entice the child audience into buying booster packs of cards.

The film contained no sexual references.

There were no scenes involving nudity or sexual activity. However, fairies and female elves were represented as attractive young females with well formed breasts, wearing short skirts and low cut tops showing lots of cleavage.

There were a few references to substances:

There was no use of coarse language.

There was some use of toilet humour and one reference to vomiting ‘I’m going to blow chunks’. There was also some use of sarcasm and put-downs.

The take home messages of Yu-Gi-Oh are that good will triumph over evil and that friendship never fails.

Positive values presented in the movie that parents may wish to encourage include: friendship, loyalty and endurance through adversity.

Parents may wish to discuss the film’s continuous use of violence as a means of conflict resolution, and the manner in which the film presented unequal gender roles.