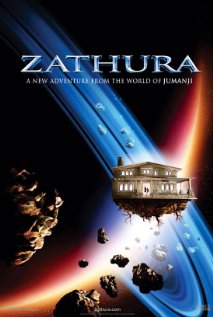 Not recommended under 8, PG to 13 (Scary scenes. Themes)

Danny (Jonah Bobo), Walter (Josh Hutcherson) and Lisa (Kristen Stewart), whose parents are divorced, spend part of the time with their father (Tim Robbins) and part with their mother. Danny aged nearly seven, and Walter aged ten, fight all the time, with Danny believing that Walter is better than him at everything, and Walter constantly accusing Danny of cheating and refusing to play with him.

The boys are left in the care of their older teenage sister for a short while and, in the middle of yet another argument, Walter lowers Danny into the basement via the dumb waiter. The basement is dark and scary and while Danny is trying to get out of it, he finds the game Zathura: A Space Adventure. When Danny starts to play the game, they are transported into outer space and all sorts of exciting things happen. They are hit by a meteor shower, Lisa is cryogenically frozen, Walter is chased by an angry robot and the house is attacked by Zorgons. Along the way they rescue an astronaut (Dax Shepard) who helps them fight the Zorgons. To get home they must finish the game.

There are a couple of violent scenes in this movie, including:

In addition to the above mentioned violent scenes, there are some scary scenes in this movie including:

Mostly children aged eight to thirteen will be ok with the scenes in this movie, although some may be worried by the robot chasing Walter with intent to ‘destroy’.

There is nothing in this movie that would scare children over the age of thirteen.

The only mild sexual reference is a small interplay between father and daughter about the term ‘hook-up’ but only children older than 12 would recognise this.

This movie’s main message is about positive sibling relationships. Also that everyone has individual strengths of which they can be proud, rather then trying to be good at everything that other people are.

This movie could give parents the opportunity to discuss with their children the potentially disastrous consequences of blaming others, saying or doing things before really thinking about the consequences, and making decisions when angry.