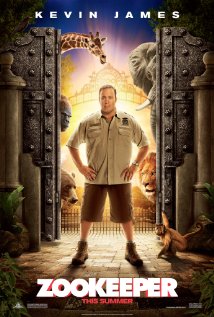 Not recommended under 8, PG to 13 (Violence, coarse language, sexual references)

Following a humiliating marriage proposal rejection by Stephanie (Leslie Bibb), Griffin Keyes (Kevin James) dedicates himself to bringing happiness to the lives of the animals in his charge.  Years later, he unexpectedly meets up with Stephanie again and this rekindles his unrequited feelings towards her.

Griffin decides that the only way to win Stephanie’s affection is to change into the kind of man she wants.  For this reason, Griffin considers leaving the zoo to take up a higher paid, more prestigious job in his brother Dave’s car dealership.  In an effort to prevent this move, the zoo animals work together to help Griffin win Stephanie back.  The animals involved in this plot include Joe the lion (voice of Sylvester Stallone), his partner Janet (voice of Cher), Jerome the bear (voice of Jon Favreau) and his friend Bruce the bear (voice of Faizon Love), Bernie the gorilla (voice of Nick Nolte), Donald the monkey (voice of Adam Sandler), and Sebastian the wolf (voice of Bas Rutten).

There is a great deal of cartoon-style violence which does not depict realistic consequences.  Examples include:

Children in this age group may also be disturbed by some of the scenes described above.

There is some product placement, including

There are a number of sexual references in this movie including:

There are some coarse language, putdowns and toilet humour in this movie, including:

Zookeeper is a reasonably entertaining comedy, which may appeal to a cross-section of age groups, although it is not recommended for the under 8s. Much of the humour is derived from either sexual references or depictions of accidents involving physical discomfort or injury to the main character.

The film’s predominant message is that people cannot be happy or satisfied with life until they are able to be true to themselves.  Unfortunately, there are some problematic subtexts, such as the notion that violence is an appropriate means of resolving conflict and therefore, those with the most power are likely to come out on top.  Divorced or separated parents may be concerned about the film’s idealised depiction of “true” love as singular and life-long.  In addition, the movie contains numerous discussions of the best ways to “get” a female, which could be interpreted as promoting a view of women as objects or possessions.